Professor Mykolas Pijus Paskalis Romeris, a founder of the Lithuanian Constitutional Law, born on May 17, 1880 in Bagdoniškis, a village in Rokiškis district, was the 7th child in the family of Mykolas Kazimieras Romeris and Konstancija Tukallo Romerienė.

Romeris ancestors date from the 17th century in Lithuania and even further back in European history. The family originates in Saxony and retained “von”, an attribute of a noble family, up to the 20th century. One of Romeris’s ancestors fought in Curonia for the Livonian order where he married and, since he become an evangelical due to secularization of the the order, started a new family branch. After several generations, the family merged with Lithuanian nobility.

Mykolas Romeris was a renowned personality whose contribution to the state, society and science cannot be underestimated. Exceptional energy, vast knowledge, strong democratic beliefs and tolerance, deep public understanding and superior human qualities enabled him to make an indelible imprint on the development of his native land.

Mykolas Romeris had the privilege to receive high education in Petersburg’s Empire Law College, established specially for the youth of nobility and to train future officials of tsarist Russia. Having no will to work for tsarist authorities, Mykolas Romeris left Russia and went abroad after graduation. The new graduate attended the History Department in the Faculty of Philosophy of Jogaila University in Krakow and studied in the world-famous Paris Independent Political College from 1902 – 1905.

Probably the most productive period in Mykolas Romeris’ life was the interwar period.  Despite his political neutrality and indifference to political power, it did not take long for Mykolas Romeris to earn an important place among the most prominent people in the country.

In 1920 Mykolas Romeris started as a district court justice and soon became a justice of the Supreme Tribunal. In 1928 he was appointed to the State Board where he worked till 1933. In 1932 he was representing Lithuania in the International Court of Justice in Hague hearing the dispute on the status of Klaipeda region. It was mostly due to Mykolas Romeris’s contribution that Lithuania was a winning party in the dispute. The case won a wide international interest and significantly strengthened Lithuania’s sovereignty over Klaipeda region. Mykolas Romeris also successfully represented Lithuania in the dispute with Estonia on payments for Panevezys-Saldutiskis railway construction heard in the Hague tribunal in 1938-1939. Mykolas Romeris was an expert on Klaipeda affairs in the Counsellor Commission on Klaipeda affairs under the government of Lithuania and took active part in the United Nations.

Mykolas Romeris as an active member of the Lithuanian intelligentsia, became a genuine advocate of Lithuania. He did not stay silent on the incorporation of Vilnius  into Poland. Having read an address by J. Pilsudsky delivered on the occasion, Mykolas Romeris sent him a letter condemning the Polish leader for turning an old Lithuanian capital into a commonplace Polish province. The letter, one of Romeris private diplomatic actions, once again proved his public spirit and devotion to his native country. “All my life, I have continuously rolled a stone up a mountain like mythological Sisyphus and every time the stone rolled back down”, he wrote in 1923.  “I have struggled to prove that nationalism is unnatural and hypocritical and we, Lithuanian Poles, have to join the ranks of Lithuanian citizens and understand our duty and honour to be in the front ranks of the state architects lead not by the interest of foreign countries but by the welfare of our people.”

For his contribution to science and teaching, Mykolas Romeris was granted a Professor’s degree in 1926 and a degree of Doctor of Juridical Science in 1932.

Mykolas Romeris’ scientific heritage is extremely abundant and versatile as seen in numerous monographs and studies: “Representation and Mandate”, “Administrative Court”, “Margins of Constitutional and Judicial Law”, “Lectures on the Lithuanian Constitutional Law”, “State and Constitutional Law”, and a number of scientific articles published in Lithuanian, Polish, French and Romanian legal periodicals. Mykolas Romeris always decisively expressed his ideas, argued consistently and persuasively, had broad outlooks and was interested in various spheres of administrative, criminal and international law as well as in the science of history. However, his favourite subject was constitutional law, where he still remains a universally valued figure.

Professor Mykolas Romeris’ merits earned him a second degree Duke Gediminas medal and a Vytautas Magnum medal. He was also awarded a Latvian second degree Three Star medal and elected a member of French Legion of Honour. Mykolas Romeris was a member of numerous academic societies, both in Lithuania and abroad, including the Science and Art Academy of Czech Republic, the International French Revolution Institute and Romania’s Royal Administrative Law Institute.

Professor Mykolas Romeris is generaly considered an ideologist of the Lithuanian Independence Movement. In 1989 Lithuanian Parliament formed a commission to evaluate the Ribentrop – Molotov pact headed by the scholar Juras Požėla. The Commission members were equipped with only  a small brochure “Sovietisation of Lithuania from1940 – 1941” written by Mykolas Romeris and providently describing Lithuania’s occupation and incorporation into the soviet empire. This small brochure eventually became symbolic of the Independence Movement in Lithuania. 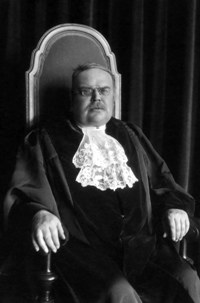