Back
University
Disability and individual needs

The priority of Mykolas Romeris University is an open and flexible study environment adapted to all students with disabilities or individual needs.

The University pays a lot of attention to:

If you have questions, please feel free to contact us:

Through the activities of the Psychological Support operating at the University, the mental health and well-being of students and employees is improved, and free consultations are provided.

Academic Affairs Centre is responsible for individualized organization of studies taking into account the information provided to the University by students with special needs and the specific personal needs expressed.

Common Areas of the University Tailored to Your Needs

The central building of the University is perfectly tailored to meet requirements of persons with special needs – there is a parking lot next to the University to park cars. The entrances to the University are equipped with ramps, which automatically open the entrance door of the building. A person in a wheelchair can enter the building independently without the help of others. Lifts are installed in the Central building and the adjoining building. The 4-story building has an elevator for easy movement between the floors. There are no obstacles to moving around within the University – auditoriums, conference halls, library reading rooms, toilets (adapted to the needs of persons with special needs on the second, third and fourth floors of the building) and also other places accessible by wheelchair that can be reached independently.

The MRU Library is well-equipped and adapted for persons with special needs – it is equipped with lifts that help those in wheelchairs to easily get to reading rooms and other Library premises. Using compensatory equipment for persons with special needs, computerized workplaces have been set up on the lower level of the Library. Those who are visually impaired can use workplaces equipped with the stationary electronic image magnifier TOPAZ XL XD 24, which has artificial lighting and a video camera that allows you to enlarge the text on the screen to the required size, to select the right color combination and adjust the required contrast. This machine magnifies the readable text from 2 to 50 times.

The availability of services for people who cannot read plain text is increased by participating in the project, “MoBiLait: Opening Learning Opportunities for People Who Can Not Read Plain Printed Text Through the Lithuanian Library Network,” which is coordinated by the Lithuanian Library for the Blind (LAB). Information services for persons with special needs are organized and  publications necessary for self-education and studies are provided.

The University Library’s Grand Reading Room (Room I-04) has 6 work stations (2 of which are computerized) for users with visual and mobility impairments: 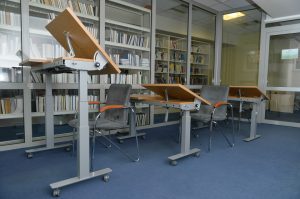 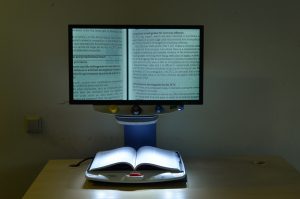 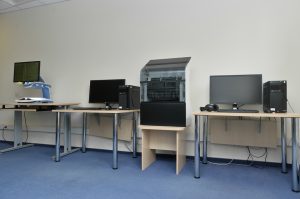 Financial support to students with disabilities 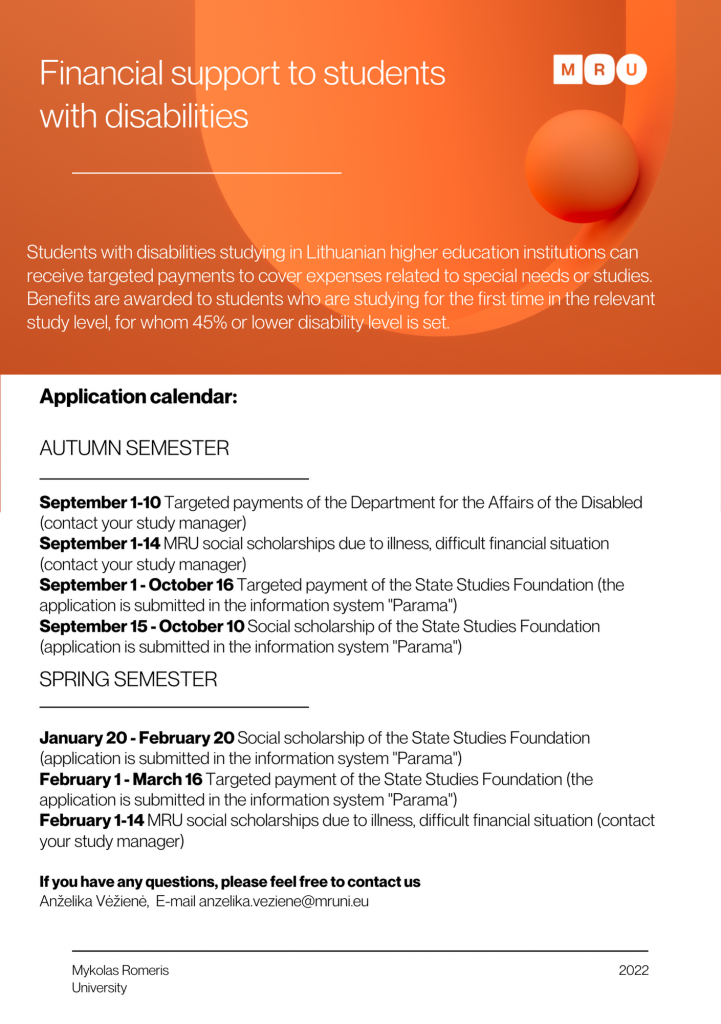 TARGETED PAYMENTS OF THE DEPARTMENT FOR THE AFFAIRS OF THE DISABLED

Students studying in an institution of higher education in Lithuania with special needs can receive specific payouts to cover expenses relating to special needs (112,92 Eur) and studies (147,20 Eur). The payouts are for students in a specific studies cycle studying for the first time who have a 45% or less level of working capacity.

The State Studies Foundation social scholarship (299,00 Eur/month) can be awarded to students of all institutions of higher education in 1st, 2nd, 3rd cycles of studies, full-time or professional studies students who have a level of working capacity of 45% or less or a severe or moderate level of disability determined in accordance with the procedure established by legal acts.

Additional financial aid for selected students for Erasmus+ studies or a traineeship abroad. Students who have participated in the competition and are selected to go on an Erasmus + study or traineeship abroad have the opportunity to receive additional funding to cover the costs related to their disability or special needs during their Erasmus + traineeship or study abroad. The application for additional support is submitted to the Education Exchange Support Fund no later than 1 month before departure.

Memo for students and academic community 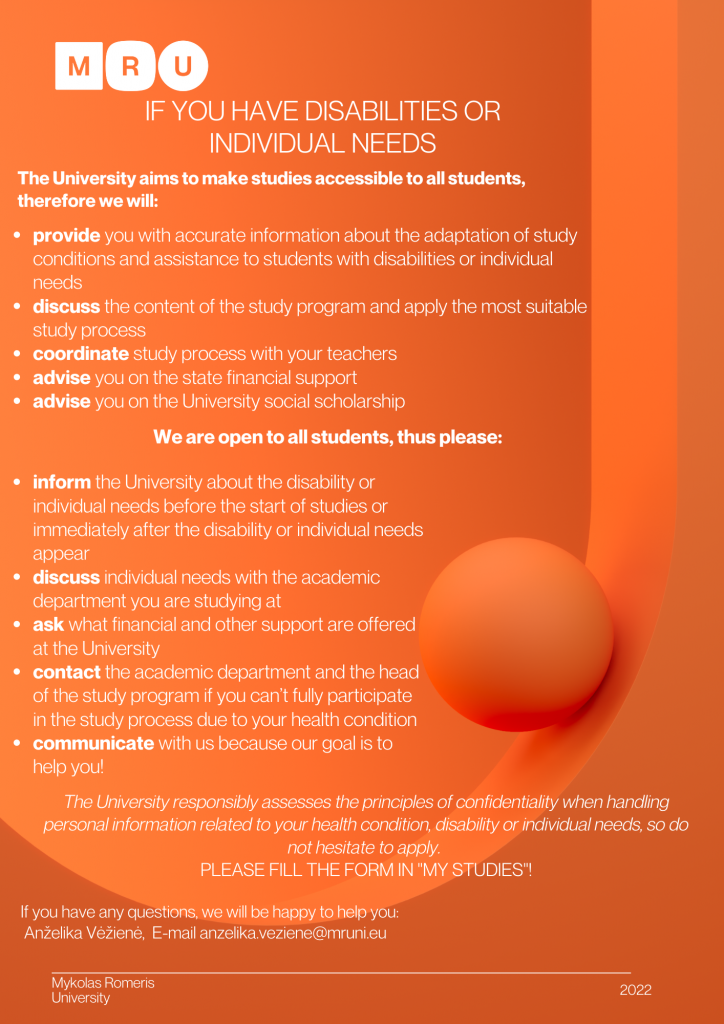 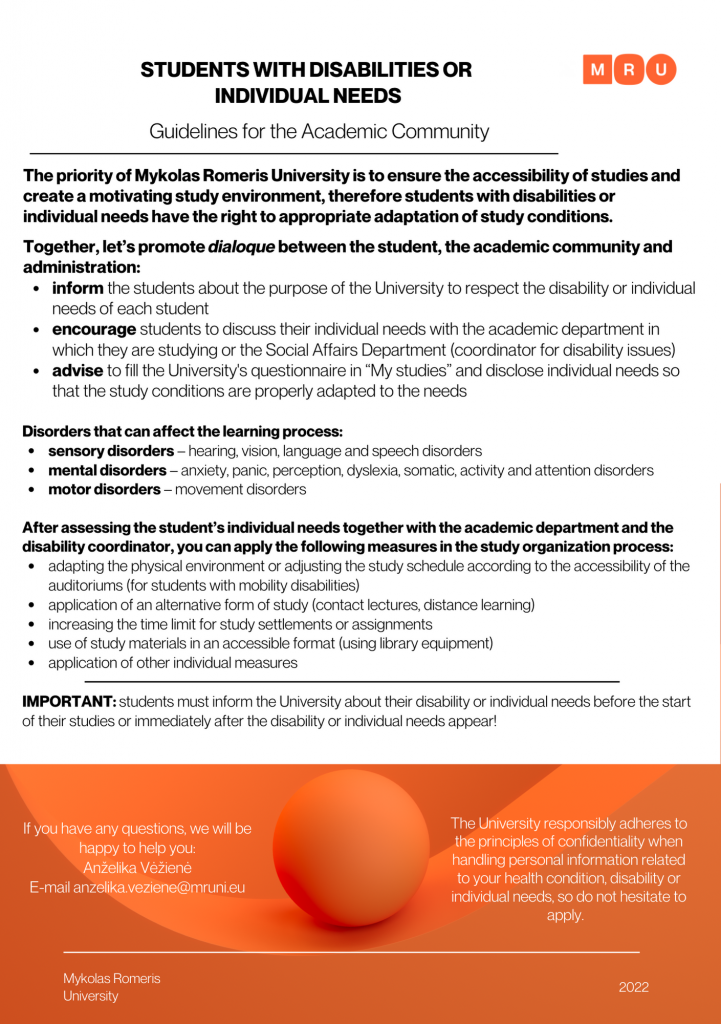 Disorders That Can Affect the Learning Process

Sensory disorders are disorders of hearing, vision, language and speech that interfere with the reception of information through sensory organs.

Anxiety disorder – a constant feeling of anxiety for no apparent reason – is accompanied by disturbed sleep, irritability, rapid fatigue, impaired concentration and other similar symptoms.

Dyslexia is a specific reading, writing or pronunciation disorder characterized by a deterioration in memory and concentration. Individuals with dyslexia may have difficulty reading and may have speech or language development disorders.

Perception disorder – a disorder caused by mental illness, damage to the central nervous system or drug addiction, characterized by non-recognition or distortion of environmental elements or sounds, false perception of phenomena (illusions, hallucinations).

Motor disorders are a limited ability of a person to move, control the movements of arms or legs.

Lithuanian Library for the Blind