May 5th, 2022, during a festive ceremony at Mykolas Romeris University (MRU), Latvia‘s President Egils Levits was awarded an Honorary Doctorate – Doctor Honoris Causa diploma in Latin and a special keepsake medal. During the ceremony, President Levits was outfitted in a velour academic cape with a cap and white shawl.

MRU‘s Senate decided to confer the Doctor Honoris Causa title to President Levits for his significant contribution to the democratic processes in the Baltic region, the promotion of the rule of law, the protection of human rights and the ideas of European integration, the European standards for the protection of human rights and the jurisprudential law of the European Union as well as for his outstanding scientific research in the fields of constitutionalism, administrative law, legal reforms and European Union law.

“The achievements of exceptional personalities, their loyalty to the values of the rule of law and democracy, are a great example for our students to follow. The activities and values of Honorary Doctor E. Levit are especially close to Mykolas Romeris University, which was established in a free Lithuania,” - said MRU Rector Prof. Dr. Inga Žalėnienė, presenting the unique MRU publication - the Constitution of the Republic of Lithuania translated into 13 languages, including Latvian.

“We foster close academic and student exchanges with 11 Latvian higher education institutions. The exchanges of researchers, lecturers and students open up new ways to strengthen the strategic partnership between our fraternal neighbors, which is becoming increasingly important in the face of today's challenges,” said MRU Rector Prof. Žalėnienė.

President Levits said during the ceremony that “by receiving this title, I feel even more compelled to continue expandind and deepening the dialogue between the legal systems and communities of our countries. There is already a solid basis to build on,“ he noted.

“Yesterday Latvia celebrated its Independence Restoration Day. Our people marched on the path to independence together. Russian aggression against Ukraine, the ongoing genocide, crimes against humanity and other war crimes are a stark reminder of the need to be ready to defend and fight for our state and freedom at all times. It is best done together, side-by-side. It is the duty and moral obligation of the Baltic states to preserve the rules-based international order, restore justice and prevent the use of brutal force against the rule of law,“ said President Levits.

During the ceremony MRU Law School Dean Lyra Jakulevičienė, presenting President Levits professional and scientific achievements, noted his research in the area of constitutionalism. President Levits is the author of the premable (introduction) to ther Constitution of Latvia adopted in 2014.

President Levits, a prominent Latvian lawyer, international judge, Latvia‘s Minister of Justice (1993-1994), and ex-Ambassador, was elected President by Latvia‘s Saeime on May 29th, 2019.

Having completed Law studies at the University of Hamburg (Germany) in 1982 as well as political science studies (1986), the prominent lawyer actively participated in the restoration of Latvia‘s independence in 1989-1991. President Levits is the author of the Concept of the Declaration on the Restoration of Latvian Independence of May 4th, 1990, co-author of a number of important legislative proposals (including the Law on the Constitutional Court of Latvia, the Law on Administrative Procedures, the Law on the Structure of the Cabinet of Ministers, etc.)

President Levits was the first Latvian Minister of Justice after the restoration of independence   (1993-1994), the first Latvian judge at the European Court of Human Rights (1995-2004) and has contributed to the protection of human rights and to the development of international and European Union law. He has received numerous awards for his activities in the field of law.

The MRU Senate confers the title of Honorary Doctor on Lithuanian and foreign nationals for achievements and significant contributions to the Republic of Lithuania as well as to Mykolas Romeris University. Since 2000, this MRU honorary title has been conferred on 29 individuals including 3 heads of state – the Chairman of the Supreme Council of Lithuania - the Chairman of the Restored Seimas Vytautas Landsbergis; Lithuania’s President Valdas Adamkus and Poland’s President Bronislaw Komorowski (2010-2015). 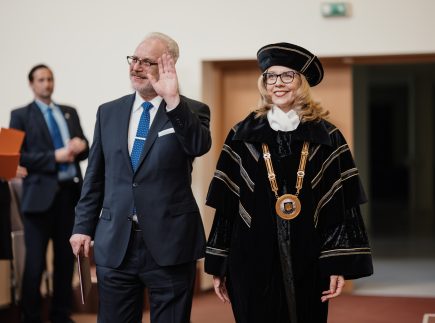 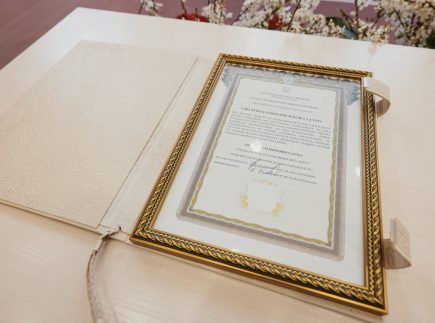 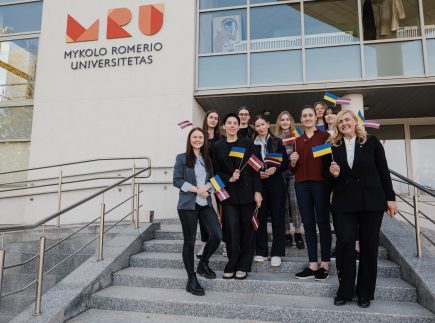 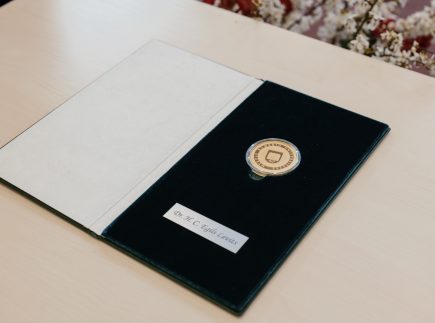