In the light of what Russia is doing in Ukraine, and the fact that Putin is a systematic liar, meaningful cooperation with Russia is not possible, therefore the NATO-Russia Founding Act is obsolete, said Karl A. Lamers. He was speaking May 10th, 2022, at the fifth annual Dr. Lamers NATO Hearings at the MRU. The Hearings are returning after a two-year break caused by the Covid-19 pandemic.

This year the topic of the Hearings was "Putin's Attack on Humanity in Ukraine: is NATO Up to the Challenge?".

The keynote speaker of the discussion traditionally is Prof. h. c. Dr. Karl A. Lamers, a former long-time member of the Defence Committee of the Bundestag. He is the former President of the NATO Parliamentary Assembly, a renowned German lawmaker with decades of high-level experience in transatlantic security issues and an old friend of MRU.

First to talk after the keynote speaker was Mantas Adomėnas, Lithuanian Vice Minister of Foreign Affairs. He said that Putin’s fascism is no longer a purely rhetorical figure: it became the fact of life and the Northern Atlantic Alliance should act accordingly, and we should brace for the long-haul campaign. M. Adomenas is closely involved in shaping today’s Lithuanian foreign affairs strategy and policies, he is commanding a vast knowledge in transatlantic relations and regional security issues.

Second participant of the panel was Linas Linkevičius, Ambassador at Large at the Lithuanian Foreign Affairs Ministry, former Lithuanian Defence Minister and former Foreign Affairs minister, former Lithuanian Ambassador to NATO, who has an intimate knowledge of NATO workings accumulated through the decades of involvement in security issues. L. Linkevičius shared his experience of historical difficulty to talk to allies about the extent of the Russian threat. He does not foresee this dialog to be easier any time soon and he concluded that romantic heroization of Ukrainian fight for freedom is very nice, but Ukrainians need action more than what L. Linkevičius called ‚poetry‘.

The panel of commentators of the Hearings also included Rima Malakauskiene, National Security Adviser to Lithuanian President, with twenty years of involvement with security and defence policies at the Lithuanian Defence Ministry. She reflected on the Russian historic mentality by saying it is the country which never regrated anything, which never did soul searching, and this problem of mentality is a long-term issue.

Independent perspective in the panel was represented by Prof. Dr. Dovilė Jakniūnaitė , a renowned Lithuanian political scientist and commentator and author of several books on Lithuanian diplomacy and security policy, “Looking for NATO in Lithuania: achievements, failures, prospects” among them, currently Head of the Department of International Relations at the Institute of International Relations and Political Science of Vilnius University. D. Jakniūnaitė in her contribution to the Hearings envisioned range of dangers to the lasting feeling of solidarity with the fighting Ukraine and warned not to be overoptimistic.

The moderator of the Hearings traditionally was MRU Assoc. Prof. Dr. Virgis Valentinavičius from the Institute of Communication.

During the Hearings K. Lamers handed out a certificate of the winner of the 4th Annual Lamers Peace Prize student essays Competition to Veronika Horchakova, an MA student of European and International Business Law at the MRU. Second Prize winner is Oles Sahan, Erasmus student also from Ukraine. He was not able to attend because of the war. Third Prize winner is MA student of the International Law Arnoldas Rutkauskas (he was not able to attend for personal reasons).

The Hearings were attended by a significant number of Ambassadors or representatives of the embassies of foreign countries based in Vilnius. In the audience there were numerous students and faculty of the MRU, as well as leaders of the management of the MRU, including Rector Prof. Dr. Inga Zaleniene. 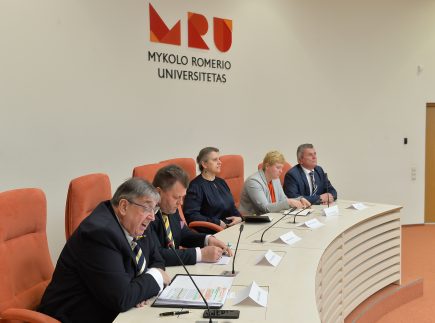 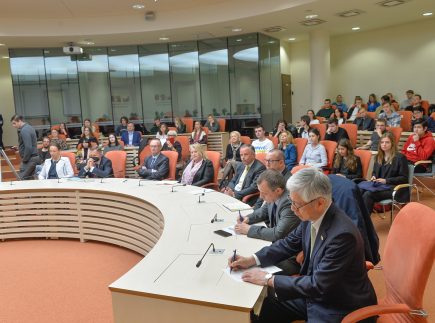 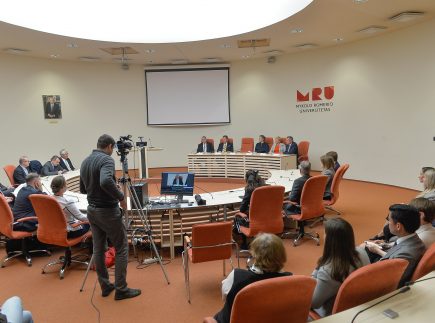 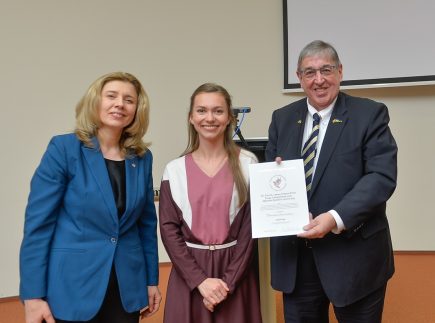