Sept. 1st, 2022, on Science and Knowledge Day festivities at MRU, winners of the 2022 Dr. Karl A. Lamers Peace Prize Contest were announced. Former German Bundestag Member Dr. Karl A. Lamers was at MRU to announce the winners. First Prize and 1000 Euros went to Ivanna Horaichuk. The Second place prize and 600 Euros went to: Vladimir Komarnickiy. Third Prize and 400 Euros was awarded to Marita Gorgiladze. All three winners are MA students of the MA European and International Business Law MA study program at the Law School of the Mykolas Romeris University. Academic supervisor of the winners was Law Prof. Dr. Virginijus Bitė.

Winners of the essay contest had to write about "NATO and the Russian - Ukrainian Conflict: What's at Stake for the Baltic Countries?"

Peace Prize certificates to winners' representatives were presented personally by Prof. h.c. Dr. Karl A. Lamers, former member of the German Bundestag, and by MRU Rector Prof. Dr. Inga Žalėnienė. (Unfortunately, winners themselves were not able to take part, since Ivanna Horaichuk and Marita Gorgiladze were in Ukraine and Georgia accordingly, while Vladimir Komarnickiy left for France to continue his studies there.)

In his congratulatory speech Dr. Lamers noted that MRU is very innovative and academically successful. He commended MRU’s resolve to enroll hundreds of Ukrainian students. Karl A. Lamers also reflected on the war in Ukraine and its impact on security of the region, Europe and entire world. He called on Russia's Vladimir Putin to "stop this war" and to respect the territorial integrity of Ukraine.

Dr. Lamers expressed wholehearted support for Lithuania’s resolute and consistent stand against Russia’s aggression in Ukraine, as well as for Lithuanian policy to take the side of the democratic Taiwan against autocratic China's threat to peace and stability. On September 2nd, Dr. Lamers will be paying a visit to the Taiwanese Representative Office in Vilnius.

In 2018 Karl A. Lamers initiated the Peace Foundation that carries his name. The Foundation sponsors contests of university student essays on security and defence issues in different EU countries. In Lithuania the contest takes place at MRU for the 4th year in a row.

Karl A. Lamers is an influential German politician, a former veteran member of the Bundestag and of the Defence Committee of the Bundestag, former President of the NATO parliamentary assembly. He maintains regular ties with major Lithuanian politicians, who are engaged in security and defence policy making.

Karl A. Lamers is a long-time friend of the MRU, doctor honoris causa and professor honoris cause of MRU. Every spring, barring pandemic lockdown, he travels to MRU to take part in the Dr. Lamers' NATO Hearings public discussions as a keynote speaker. 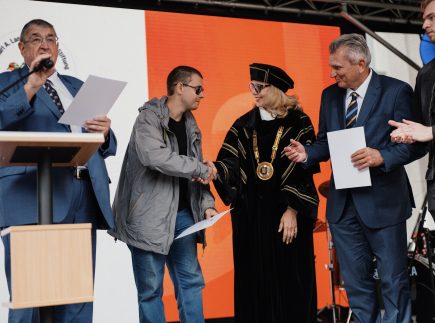